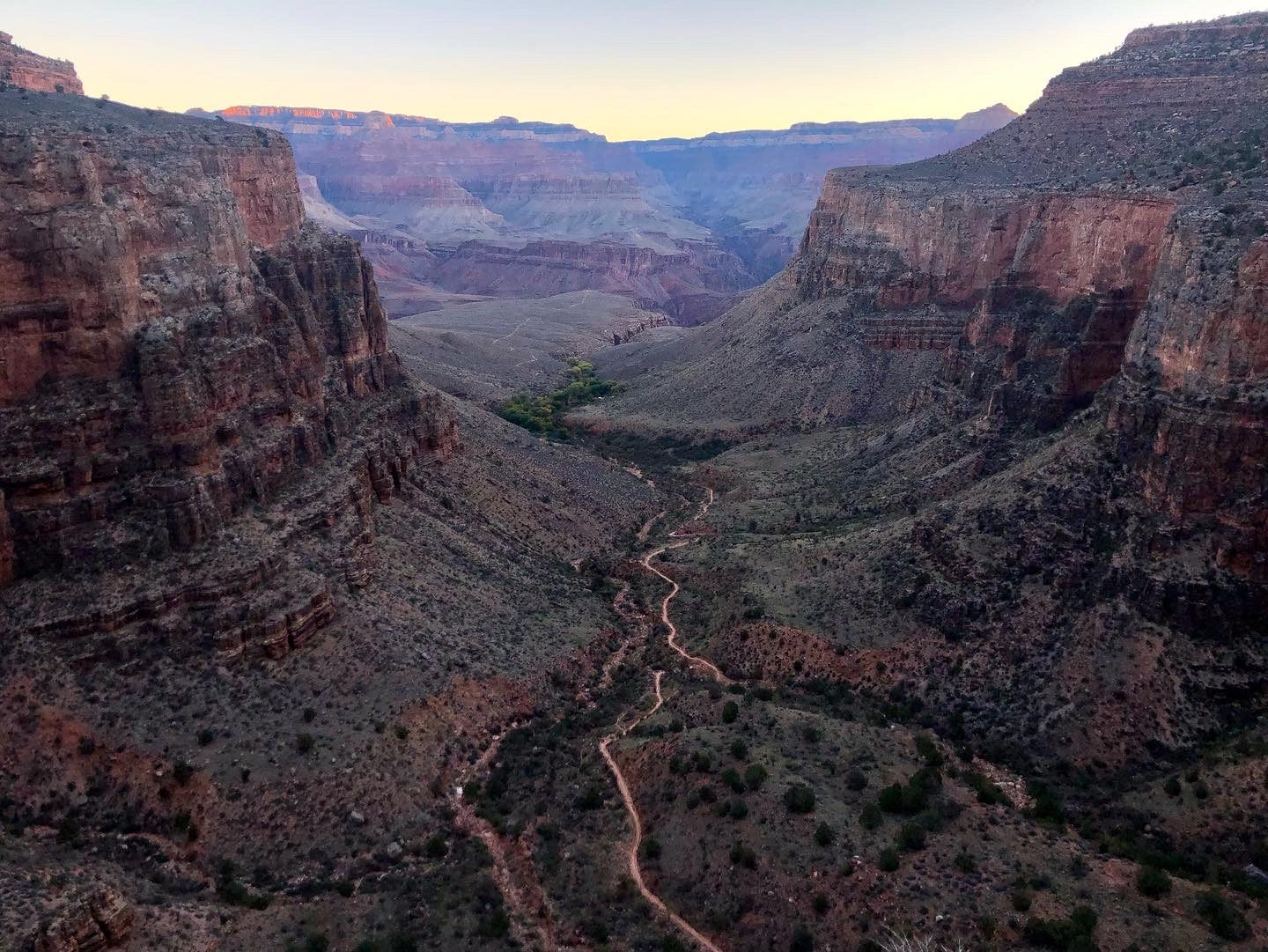 This week’s journey is a continuation of our last, documenting my October 2021 solo backpacking adventure Rim-to-Rim-to-Rim across the Grand Canyon. The following photos and journal entries recount my trek from the North Rim to the South via the North Kaibab and Bright Angel Trails.

If you haven’t checked out the first leg of my journey from the South Rim to the North, I encourage you to start there; otherwise, welcome back and thank you for joining me yet again!

As a reminder, my complete itinerary, routes, mileage*, and elevation loss/gain are listed below; I’ve also included a trail map for reference.

Day 2: Bright Angel Campground to Cottonwood Campground via the North Kaibab Trail (with a side trip to Ribbon Falls) – 13.0 miles, 1600′ elevation gain

*I wander and explore quite a bit while backpacking, and this trip was no exception; as a result, my recorded mileage was in excess of the official distance between each of the locations listed above.

The North Kaibab Trail takes day hikers, backpackers, and (seasonally) mule trains on a spectacular journey from the North Rim to the Colorado River. The section I was covering that afternoon – or more precisely, re-covering, as I’d already hiked it that morning – was constructed in the mid-1920s by a small crew using dynamite and jackhammers, often running along little more than a narrow (3-5 foot wide) shelf in the cliff wall. Many hikers on a one-day trek Rim-to-Rim venture through this area in the very early hours of the morning, with only headlamps to guide them. Having seen the conditions here first-hand, in daylight, I’m glad I wasn’t doing the same – I’m not a particularly graceful hiker, and one wrong step here would surely have been my last.

After enjoying a wonderful picnic lunch with my parents at the trailhead, I set off back into the canyon at 12:45pm. While the sun’s harsh glare had washed out the scenery mid-morning, the light in the afternoon was considerably softer, and I took many photos as I descended back into the canyon. These document the trail conditions, and rapidly changing environment, that I encountered as I hiked from the North Rim back to the Red Wall.

I wasn’t prepared to be as blown away by the beauty of the North Kaibab Trail as I was by the South, but it was every bit as spectacular – just in a very different way. The vast majority of visitors to the Grand Canyon never come to the northern reaches of the park, but I would highly recommend it. The scenery here was truly stunning.

I did a bit of trail running (who am I?!) between Roaring Springs and Manzanita Rest Area, and made it back to my site at Cottonwood Campground at 3:15pm. I rested in my tent for an hour, then decided to dust off my Jetboil stove (for the first time on the whole trip) to make dinner. Chicken pesto pasta was a definite keeper! I settled in early for the night, ready to make a very early start the next morning on my longest day of hiking.

I woke up shortly after 4am and decided to pack up my camp and hike in the dark back to Phantom Ranch. I had already done this 7-mile section of the North Kaibab Trail two days prior, so I didn’t feel I was “missing” any of the scenery, and hiking under the starry skies was absolutely breathtaking. Dawn began to appear as I entered the narrow confines of Bright Angel Canyon, and I arrived back at Phantom Ranch a few minutes after 8am.

Phantom Ranch is a historic oasis nestled beside Bright Angel Creek a short distance from its confluence with the Colorado River. In the 1920s, the National Park Service commissioned the establishment of a tourist facility within the canyon. The rustic cabins and main lodge – designed by Mary Elizabeth Jane Coulter, and built of wood and native stone – were first opened in 1922, and collectively serve today as the only lodging below the canyon rim. Phantom Ranch – a name selected by Coulter herself – can only be reached by mule, on foot, or by rafting the river. The dormitories remain closed as of March 2022 due to the COVID-19 pandemic, and space in the cabins is extremely limited; reservations are currently booked out over a year.

Hikers and rafters (including those not staying at the Ranch) can reserve cooked meals in advance, as well as visit the walk-up cantina for snacks, supplies, postcards, and the ranch’s world-famous ice cold lemonade. I found myself a picnic table beside the cantina, ate my granola breakfast, and enjoyed two cups of lemonade. It was so good!

I also drafted postcards to little A, Tito, and my parents, before popping them in the outgoing mailbox for the mules. Fun fact: Phantom Ranch and the nearby Havasupai reservation are the only places in the world in which mail is still dispatched by mule. Little A. loved his first postcard!

I was eager to keep moving – mostly to avoid the hot sun I was likely to encounter as I ascended the South Rim toward Indian Garden – so I left Phantom Ranch and wandered back in the direction of Bright Angel Campground. I met the sweetest wee mule deer fawn at the bridge over the creek, then set out onto the Bright Angel Trail for the first time.

The trail quickly crosses the Colorado River via the Silver Bridge, the less stable and exceedingly more alarming counterpart to the Black Bridge a short distance upstream. Why does this bloody thing move so much when you cross it?? I was smiling on the outside, cursing on the inside, as I crept my way across it.

Phew – I made it. The Bright Angel Trail turns right here, then follows the Colorado for a mile and a half on its way to River Resthouse.

There is a small sandy cove – Pipe Creek Beach – beside the resthouse, which ended up being the perfect place to soak my shirt in the river (a great way to keep cool on the ascent!) and have one last snack before the push to Indian Garden.

Doing this stretch of the trail in the late morning was surely more comfortable than in the late afternoon, but it was still sunny, exposed, and straight uphill. I took short breaks to drink water and to let another mule train pass, but otherwise just kept myself moving.

I made it to Indian Garden – 12 miles from where I’d started that morning, at Cottonwood Campground – shortly after noon. It was HOT – the thermometer in the sun read 110 degrees – so I found myself a shady campsite (number 8, to be exact) under the trees and settled in my tent for a few hours of rest and reading. I also met another solo female hiker from Seattle, and we chatted about our experiences in the canyon, our hiking bucket lists, and all the things we missed in the Pacific Northwest. We also talked about the ginormous tarantula she had seen wandering through her campsite in the direction of mine. More on that later.

We arranged with another group in the campground to make the short (3 miles roundtrip) hike out to Plateau Point for dinner and sunset that evening, and headed out the trail a few minutes after 4pm. Plateau Point has some of the most spectacular 360-degree views in the entire Grand Canyon, and is an absolutely amazing place to watch the colors of the setting sun splash across the horizon.

The canyon’s palette of colors changed dramatically after the sun went down. Cliff walls, typically in glowing hues of red, orange, and gold, became subdued in the late evening light, and the river took on a deep emerald tone. It was a stunning and ethereal sight.

It was lovely to have other human company after four days alone, and we had a great time sharing stories about our hiking adventures around the world. I made my way back to Indian Garden as the light began to fade, exhausted but happy after 17 miles of hiking and exploring.

I got back to my campsite in the dark, and started seeing tarantulas everywhere. Not really, of course; they were all just a figment of my weary imagination, but every little thing that I passed over with my headlamp – fallen leaves, rocks, bark, etc. – was a freaking tarantula. Or a scorpion. Or [insert creepy crawly desert insect here]. I shined my light into every nook and cranny of my tent – all clear – and then inched into my sleeping bag, hoping to survive the night.

I woke up around 5:15am – yes, I survived the onslaught of imaginary insects swarming my tent in the night – and got to work quickly breaking down my camp, eager to take on my last day in the canyon. I was back on the Bright Angel Trail from Indian Garden by 6am, and spent the first 15 to 20 minutes of the hike in darkness. The light quickly crept up the canyon walls, however, and illuminated the trail as I arrived at 3 Mile Resthouse a few minutes before seven.

I stopped here to eat a quick Clif Bar breakfast, then continued the slow but steady push up to 1.5 Mile Resthouse.

I took my phone off airplane mode here to see if I had a signal – yay, I did! – and let my parents know I was within an hour of the trailhead.

The next mile and a half featured a series of steep switchbacks (the so-called Devil’s Corkscrew), and I was glad to have a short rest while one last mule train passed by. I started encountering lots of day-hikers and tourists in the final half mile to the Rim, many with questions I was happy to answer about camping and backpacking within the canyon’s main corridor.

I passed through Lower and Upper Tunnel around 8:30, and was greeted by the sun as it finally emerged over the edge of the rim. So close!

My parents hiked a short distance down the trail to meet me, and snapped these photos as I arrived at the Bright Angel trailhead. Finally, back at the South Rim!

Our next journey: Conwy Castle – Wales

One thought on “Backpacking the Grand Canyon Rim-to-Rim-to-Rim: Part 2”