This week’s journey takes us back to the hauntingly beautiful ruins of a real Wild West boomtown: Bodie, California. Once a vibrant gold rush settlement with a storied – and often sordid – past, Bodie is today a veritable ghost town frozen in time.

Located on the eastern slopes of the Sierra Nevada, the town of Bodie was established in 1859 following the discovery of small amounts of gold in the hills north of nearby Mono Lake. Its founder – W.S. Bodey of Poughkeepsie, New York – died in a blizzard within months of his discovery, never seeing the town that bears (and misspells) his name.

Mining in the area progressed slowly, until a rich body of gold ore was discovered within a local mine in 1875. News of the discovery spread quickly, and Bodie transformed from an isolated mining camp into a boomtown virtually overnight. Men, women and children came from throughout the United States, and from around the world, to live and work here. From 1877 to 1881, Bodie’s mining district expanded rapidly to include 30 mines and nine stamp mills. Homes and businesses were also built at a steady pace, reaching over 2,000 by 1879. In 1881, the town claimed 65 saloons, 18 lodging houses and hotels, three breweries, more than half a dozen markets, restaurants, two banks, barber shops, newspapers, a school, a post office and a telegraph office. While some estimate the town’s population at nearly 10,000 during its heyday, census records suggest Bodie’s population probably peaked at 7,000 to 8,000 during this time.

Community-minded residents congregated on the south side of Bodie, organizing children’s concerts, plays and recitals, a fancy dress ball, and an annual Fourth of July street parade. The north side of town, however – with its omnipresent saloons, brothels, gambling halls and opium dens – attracted a rougher element, giving the town a reputation for bad men and wild times. Murders, shootouts, bar-room brawls and stagecoach robberies were common occurrences, leading the Reverend F.M. Warrington to describe Bodie in 1881 as “a sea of sin, lashed by the tempests of lust and passion.”

The boom was over just four short years later, and by the early 1880s, Bodie began a slow decline. Several smaller mining companies went bankrupt, and many residents left the area to pursue livelihoods elsewhere. Despite the construction of a narrow-gauge railway between Bodie and Mono Lake in 1881, the town’s population dwindled to just 3,000 residents. Major fires in 1892 and 1898 destroyed much of the business district, and by 1910, fewer than 700 people remained in the town. In 1917, the railway was abandoned, its iron tracks scrapped. A disastrous inferno in 1932 swept away 95% of Bodie’s structures, and within a decade, only 90 residents were recorded in the U.S. Census. While some mining continued, there were no new strikes and companies made only minor profits. Although a handful of residents remained after World War II, by the late 1940s, Bodie was a ghost town.

Bodie was designated a National Historic Landmark in 1961, and in 1962, after years of neglect, the town site became a State Historic Park. The park service preserves the town in a state of “arrested decay”, a delicate balance of upkeep and preservation. The interiors remain just as they were, furniture and other goods left in place, as their occupants moved on.  Repairs are made only to the extent they restore the existing 110 structures – no improvements or alterations are made.

My parents, little A., Griffey and I visited Bodie on a beautiful day in September 2019. We parked in the small gravel parking area and set off mid-day on a self-guided walking tour of town.

One of the first buildings we encountered was a small church. Built in 1882, this Methodist church is the only place of worship still standing in Bodie. A Catholic church built in the same year burnt to the ground in the fire of 1932.

To the east of the church, at the intersection of Green and Park streets, stands the home of James Stuart Cain, one of the town’s most prosperous residents. Cain arrived in Bodie in 1879 at the age of 25, quickly establishing a successful lumber business at nearby Mono Lake. In 1888 he assumed ownership of the town’s central bank, a position he held until the bank was engulfed in the fire of 1932. In 1915, he acquired a significant stake in the highly lucrative Standard Company mine, later purchasing multiple properties throughout Bodie. Cain’s descendants were among the town’s last occupants as Bodie’s population sharply declined in the 1930s and early 1940s. 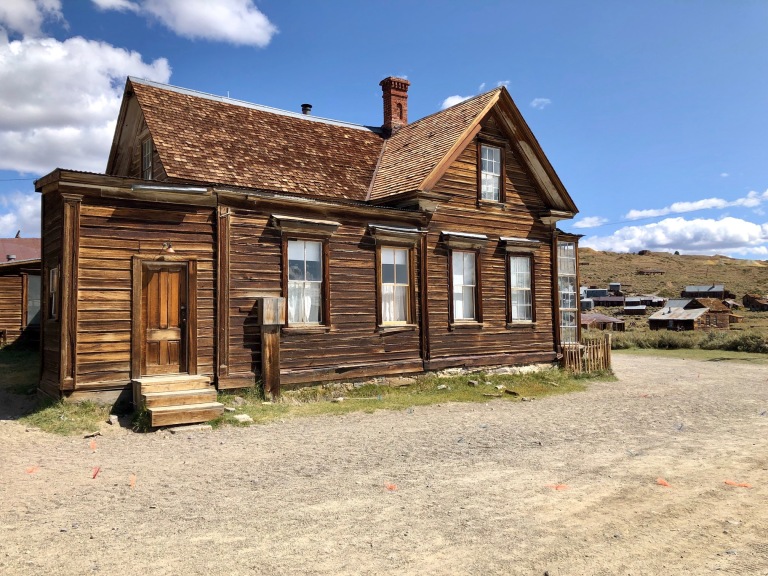 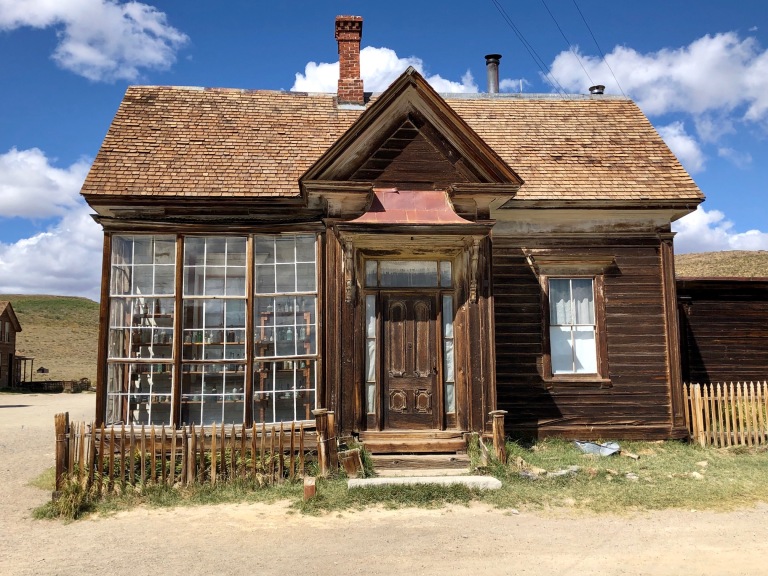 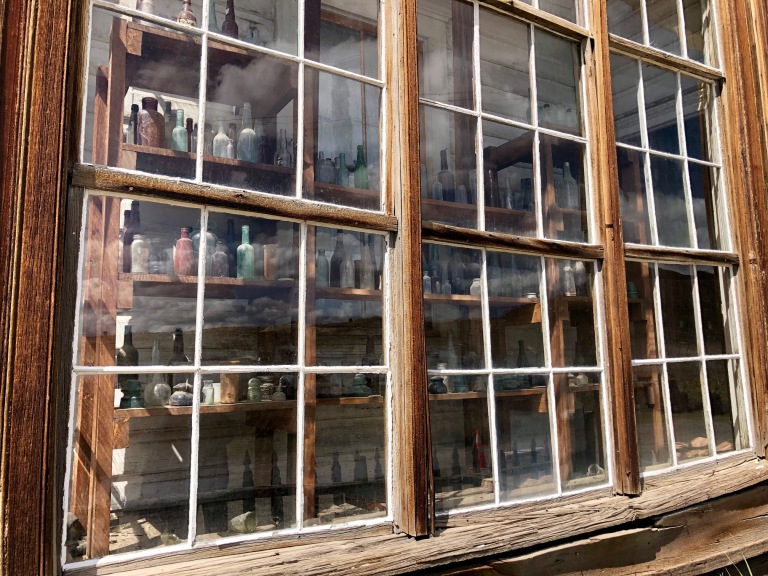 The town’s sawmill stands directly adjacent to the J.S. Cain residence on Park Street. While small, this was likely one of the town’s busiest properties year-round, as Bodie’s residents required a near-constant source of building materials and fuel to heat frigid homes and businesses at an elevation of over 8,000 feet.

Sam Leon’s bar (left) and Joe Hahner’s barber shop (right) are among only a handful of businesses on Bodie’s Main Street following the disastrous fire of 1932. Born in China in 1879, Leon opened the bar in 1937 after his U.S. Hotel – once the town’s largest lodging house – was lost in the fire. A restaurant occupied the building prior to Leon’s purchase. The barber shop next door was the last opened in Bodie before the town was abandoned.

Directly across Main Street from Leon’s bar and Hahner’s barber shop stands what remains of Bodie’s firehouse. The structure seen here was rebuilt by the California Conservation Corps in the 1930s. 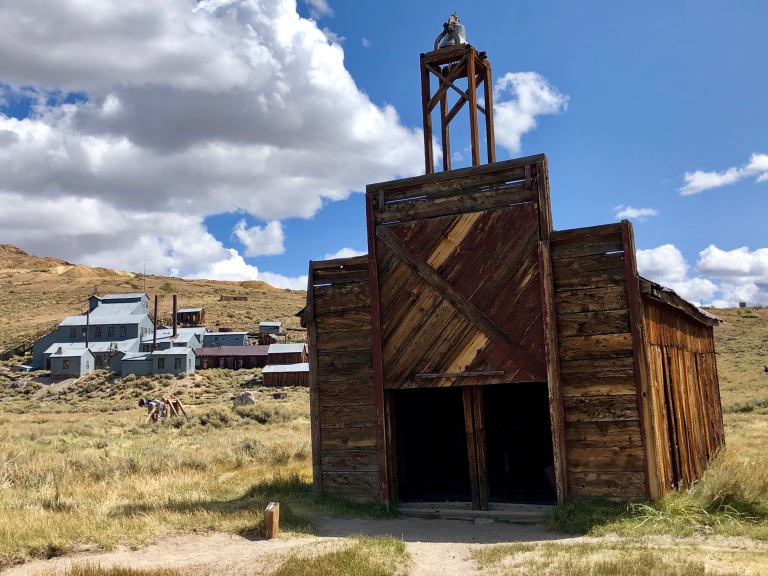 Mere steps away from the firehouse stands Wheaton & Luhrs. First established as a store in the early 1880s by George H. Wheaton and Nicholas C. Luhrs, it became a United States Land Office from 1885 to 1886. Beginning in 1910, the property served as the office for a local hydroelectric company, and finally, in the 1920s, as a hotel and boarding house known as the Bodie Hotel. 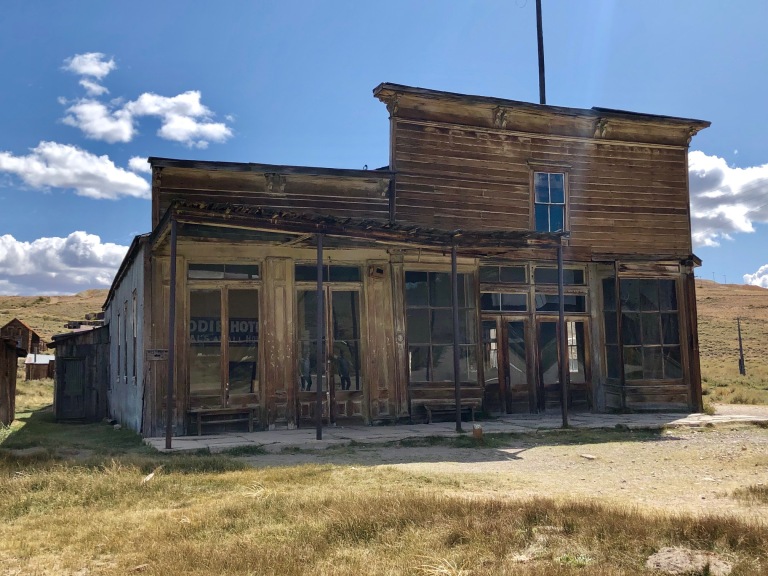 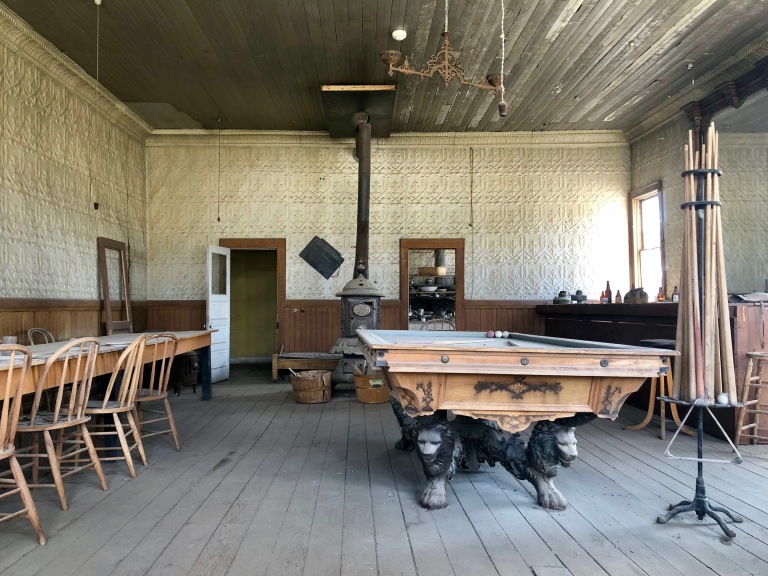 The Boone Store & Warehouse, located directly across from the erstwhile Bodie Hotel at the corner of Main Street and Green Street, was built in 1879. One of several such general mercantiles in town, the store was owned by Bodie Water Company president Harvey Boone and his partner J.W. Wright. Two Shell gas pumps and a 1927 Dodge Graham are situated directly adjacent to Boone’s storefront. 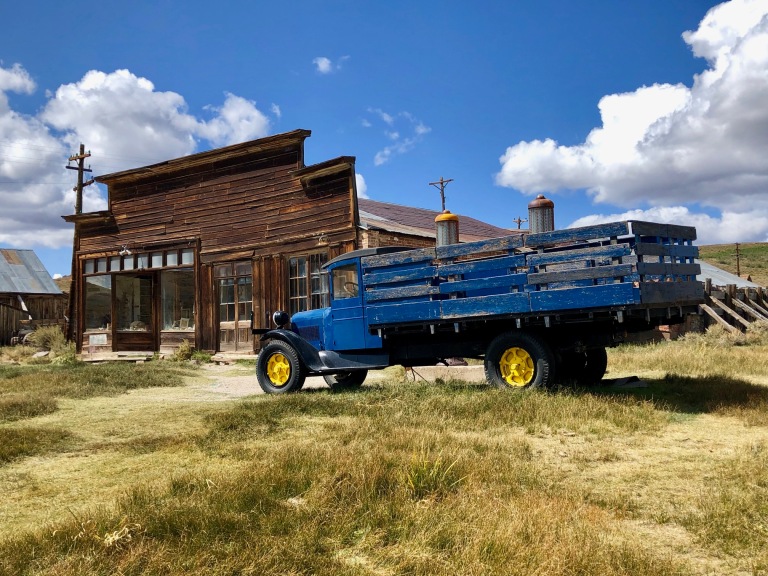 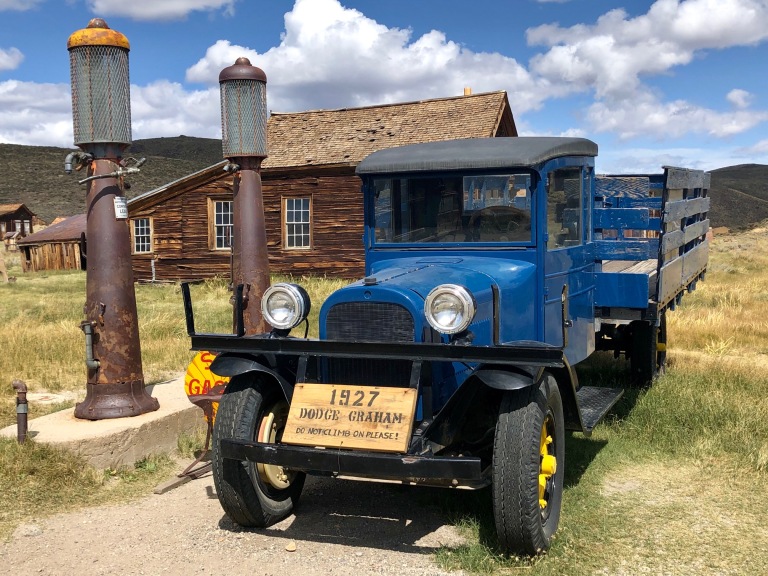 The brick structure pictured below – the only one of its kind in Bodie – was first used as a post office (downstairs) and lodging house (upstairs) in 1879. The building later became the DeChambeau Hotel. The adjoining I.O.O.F. (International Order of Odd Fellows) Hall was once one of Bodie’s most popular buildings, operating in later years as an athletic club.

The gravity-defying structure at the intersection of Green and Main Streets served, at various points in its history, as a hotel, a clothing store and a casino. 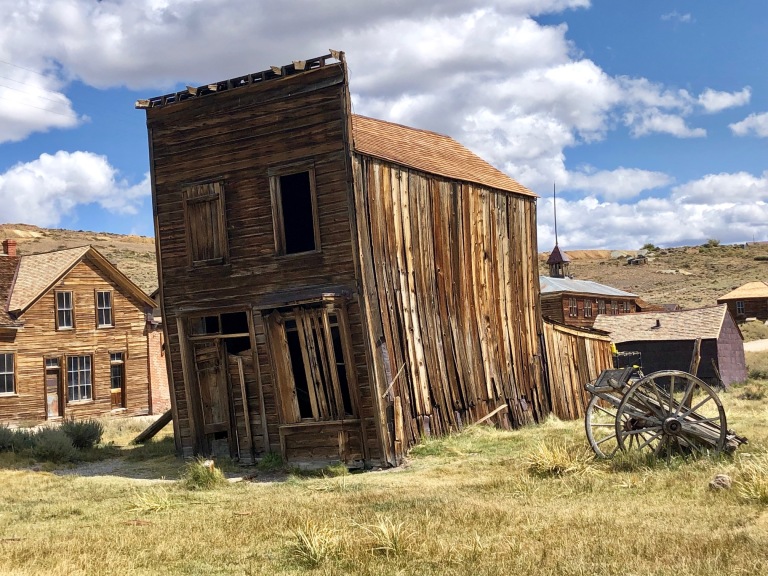 Originally constructed as the Bon Ton Lodging House in 1879, the structure below – located on Green Street – later became the town’s schoolhouse. Over 600 students were enrolled during Bodie’s boom years in the late 1870s and early 1880s. The school closed its doors for the last time in 1942. 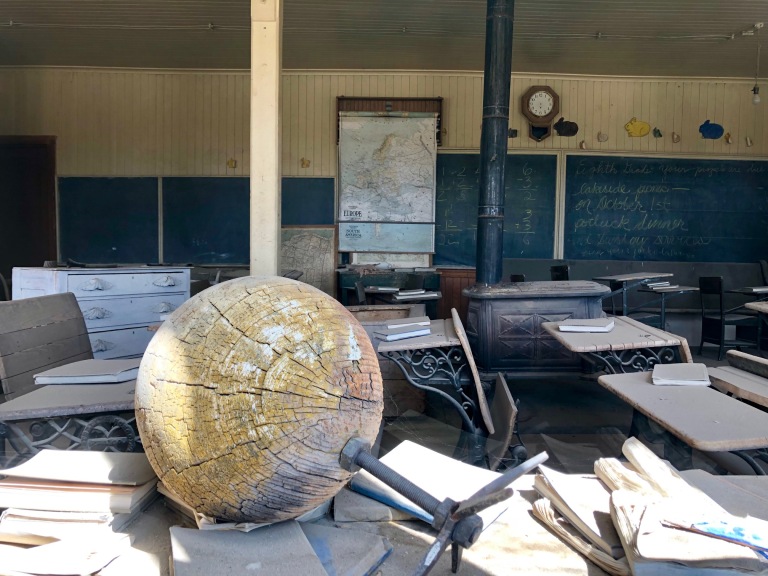 The remains of Bodie’s most successful mining operation are scattered across the eastern slopes of the town. Founded as Bunker Hill, and later Bullion Mine, in 1861, it was renamed the Standard Mine in 1877 after a collapse in its shafts revealed a rich vein of gold-bearing ore in 1875. The mill on site today – rebuilt with corrugated steel in 1899 after the original wooden structures were destroyed in the catastrophic fire of 1898 – used heavy iron rods known as stamps to break up quartz rock containing gold and silver. Mercury and cyanide were later used to separate the metals from the rock. The Standard yielded more than $18 million over 38 years.

While the mill is still largely intact, its buildings and the surrounding area are considered hazardous. Visitor access is permitted only on a guided tour. 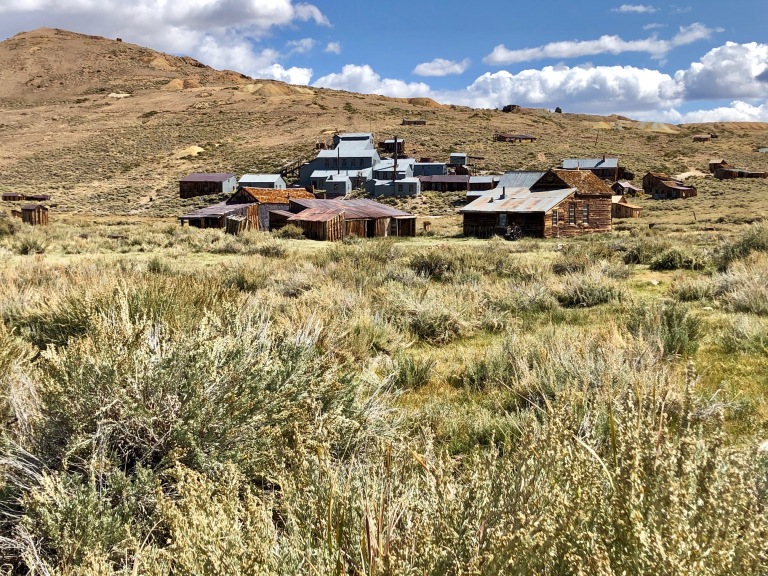 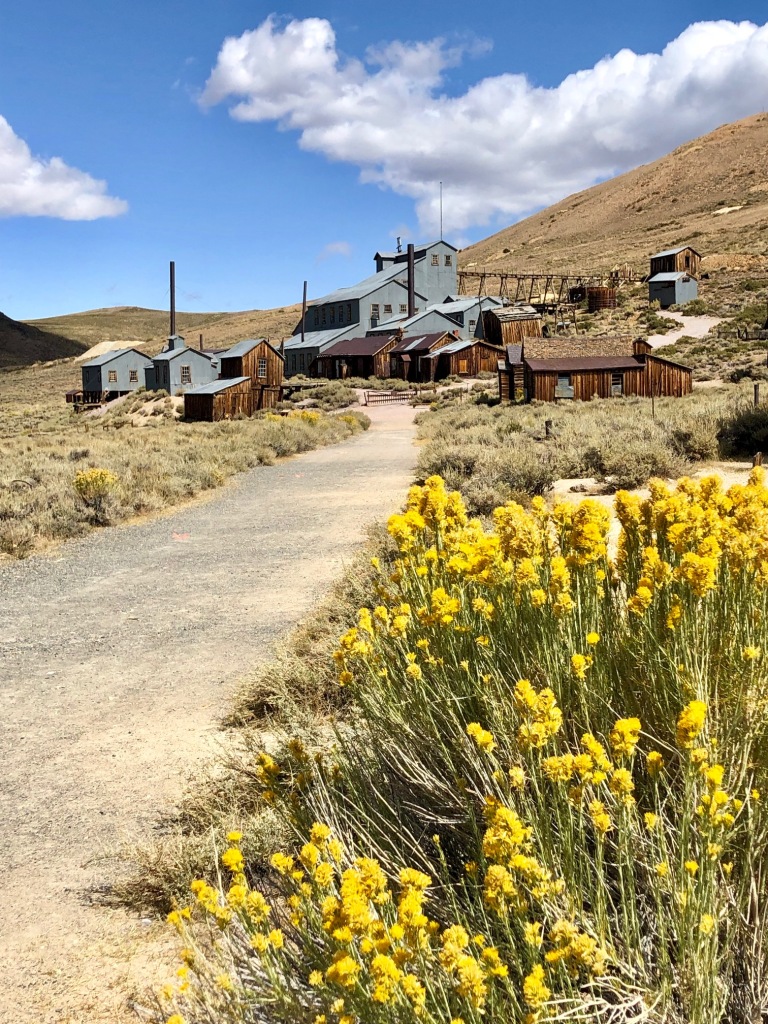 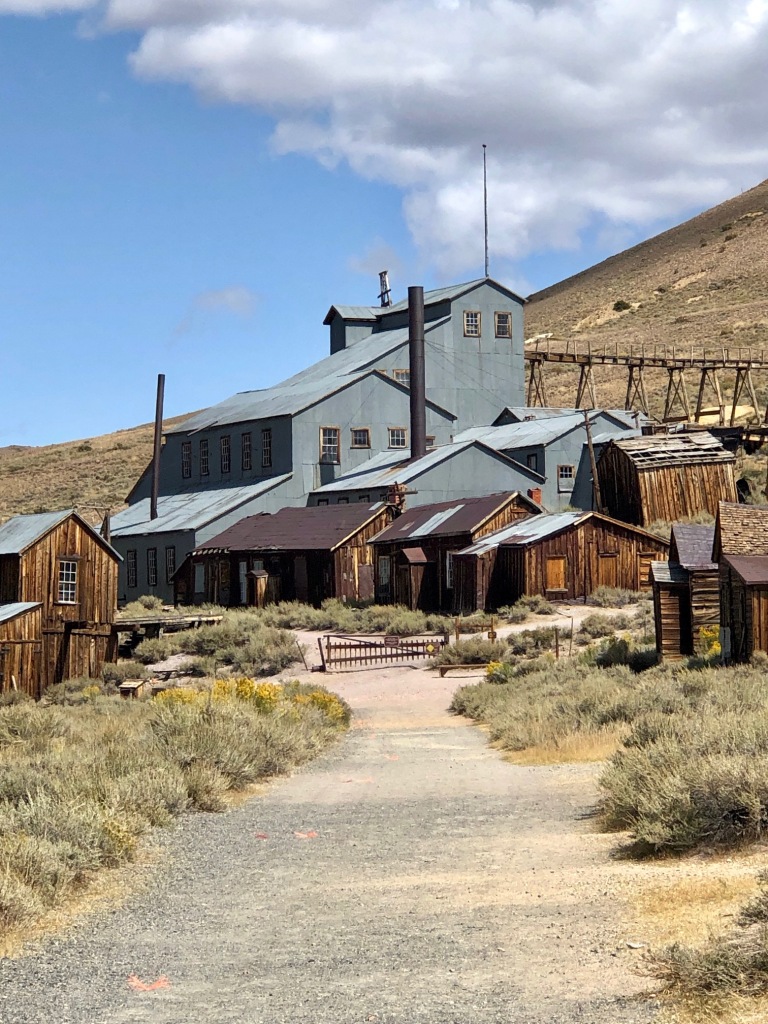 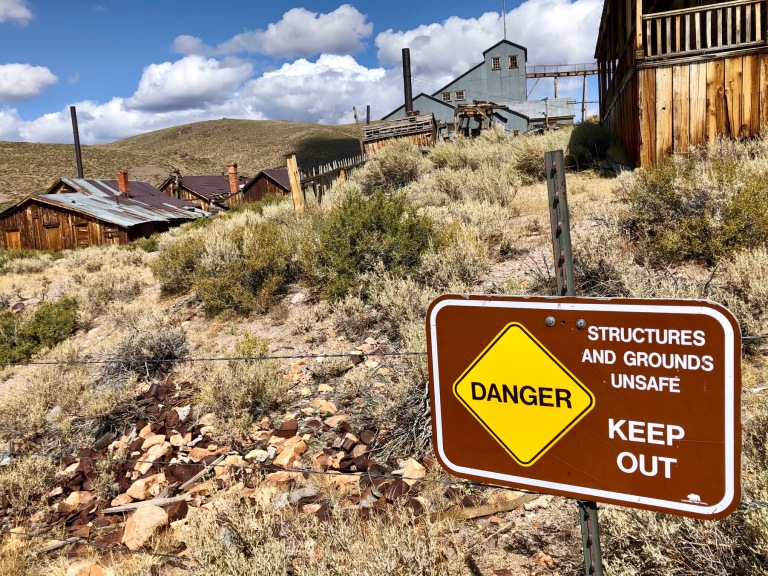 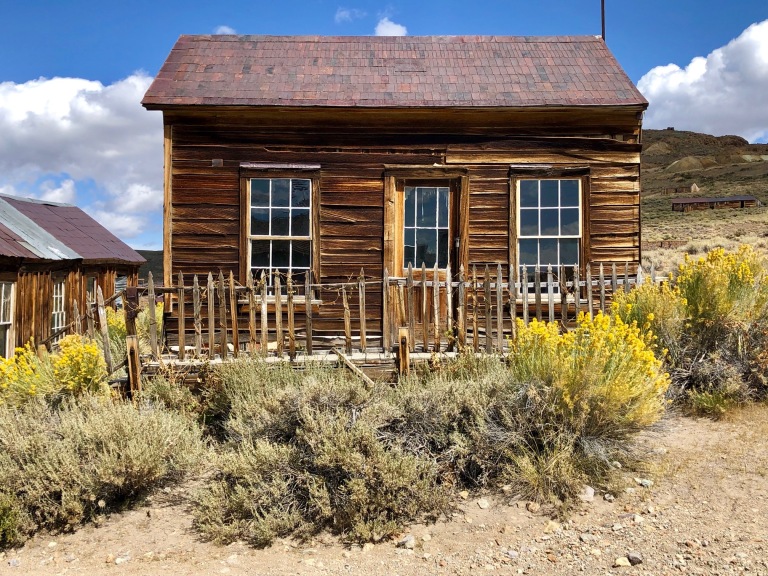 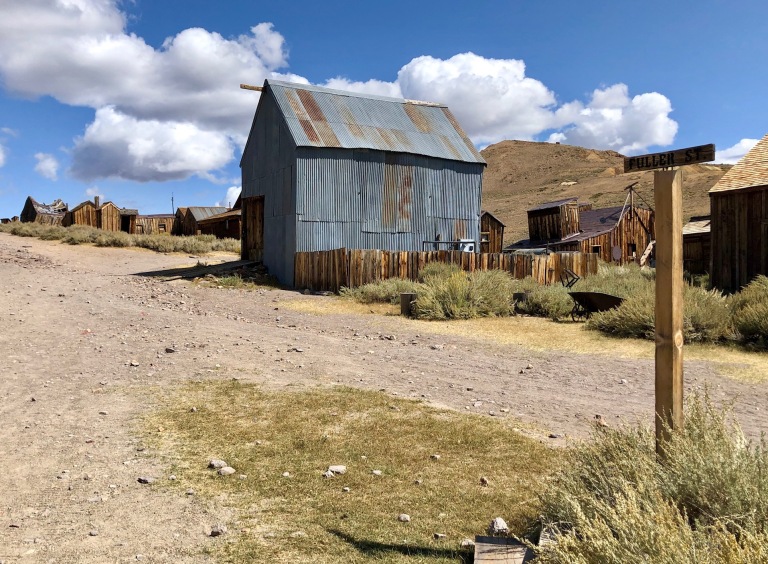 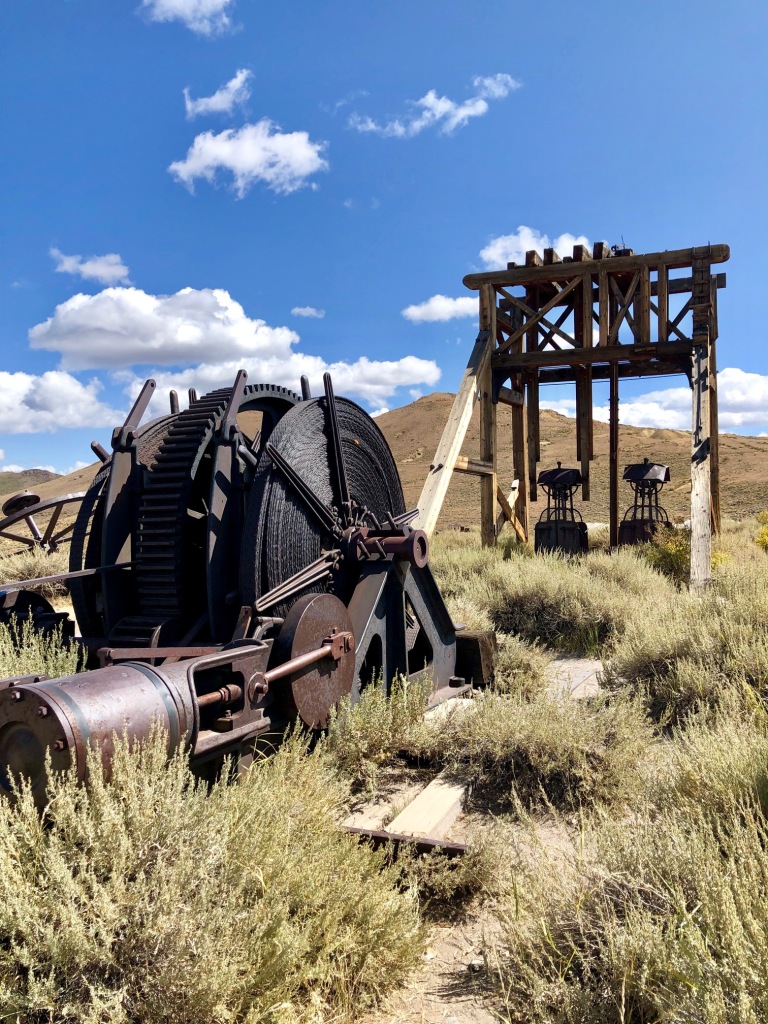 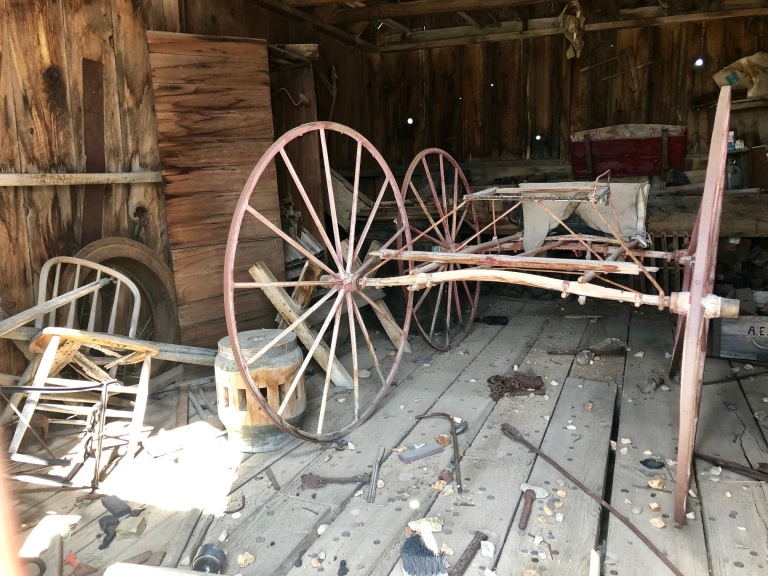 As we circled back to the parking area, we stepped briefly into Miller House, one of the few structures in Bodie that permits visitors inside. The house once belonged to Canadian Tom Miller, a teamster for the Bodie Railway and Lumber Company, his wife Jessie and their two children. Although ravaged by time and the elements, the Miller home looks today much as it did in the late 19th century, with all of the features and elements found in many modern homes. It offers a fascinating glimpse into domestic life in a busy western gold town. 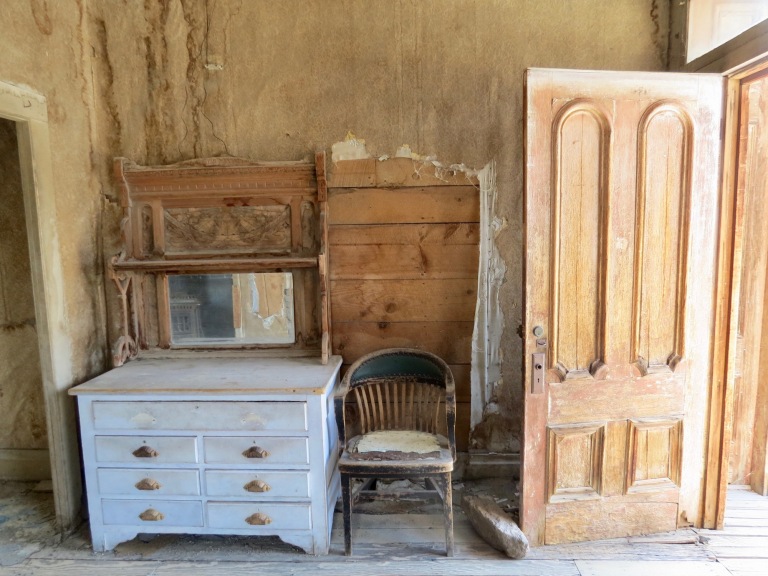 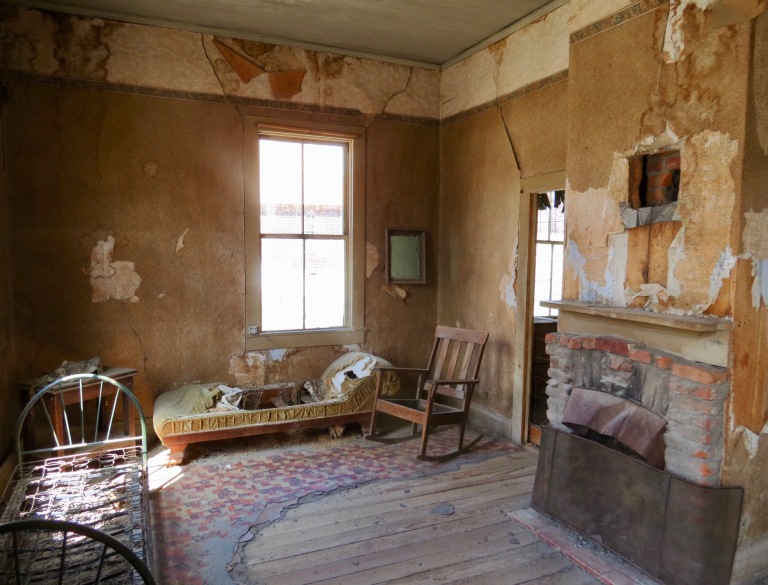 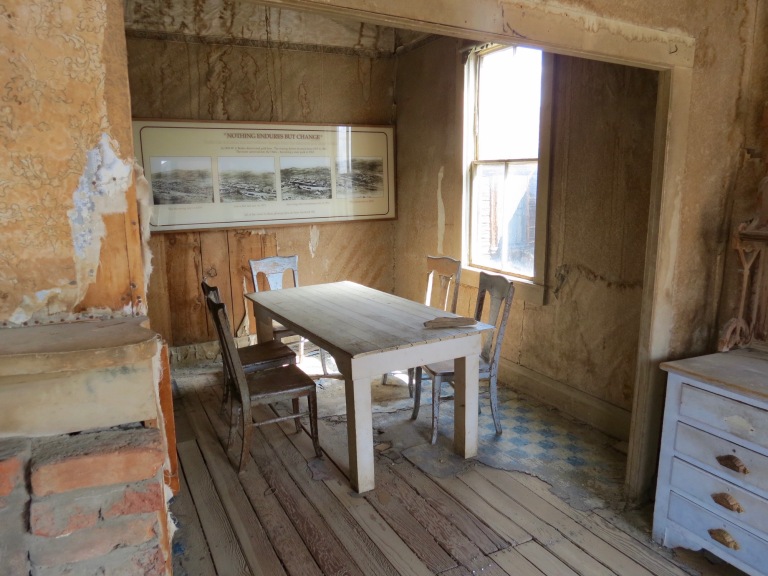 It’s truly amazing to consider that what remains here today is only 5% (!) of a once sprawling, vibrant metropolis. This is one of the most fascinating historic sites I’ve ever visited in the American West, and I’d like to express my sincere appreciation to California State Parks for their phenomenal stewardship of this beautiful place. I look forward to visiting again, with T. along for the ride!

Thank you for joining me on this unique California adventure! -B. June